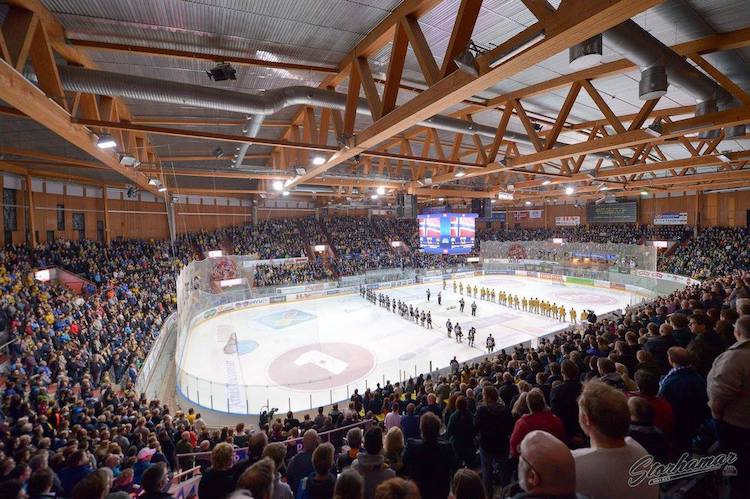 The 6th of December 1992 was the opening date of the brand new Hamar OL-Amfi, built for the olympics in Lillehammer in 1994. The arena has approximately 5000 seats, and a maximum capacity of 7000.

The arena was built to house the figure skating and short-track speed skating during the Olympics, and has housed since its opening in 1992 the Storhamar hockey club. In 1999, the Ice Hockey World Championship was held in Norway and Hamar OL-Amfi was one of the venues.

In February 2016, the arena changed its official name to CC Amfi, as the national shopping centre giant CC, bought the naming rights, and a brand new LED centre-ice scoreboard was installed.

Hockey came to Hamar in the mid fifties and in 1957 it got its own branch of Storhamar Idrettslag (Sports club). Despite being upstarts and having quite a modest infrastructure, the hockey team took big strides fast. By 1963, they reached the second level of Norwegian hockey. Playing outdoors on naturally frozen ice, they started to lag behind clubs from bigger cities, so, in 1981, a new arena, Storhamar Ishall, was opened and the club celebrated with a second ascension into the top level, where it has remained ever since.

Even though Storhamar was among the top teams throughout the late eighties and early nineties, they struggled to make the absolute summit, regularly finishing second in the league and going out in the semis of the playoffs. When it was announced that neighbouring Lillehammer would host the 94 Olympics, the lobbyists tried to get one of the arenas in Storhamar. The plan succeeded and in December 1992 they moved in to the new building. This helped the club and the sport immensely, as people now could watch the games in comfort and with a great view. The club's revenues grew drastically and soon the biggest names in the Norwegian game were knocking on the door. At the end of the first season, the elusive first trophy was secured when the league championship came to Hamar. In the next few years, Storhamar went from being a contender to a dominant force.

After winning its sixth title in 2008, recurring economic problems forced the club to make cuts, and for few seasons had to content with mid-table finishes. After another crisis in 2013-14, everything turned around. A group of local businessmen saved the immediate future of the club, and the rest was secured with a love affair between the fans and a very exciting group of players and the club is now a dominant force in Norwegian hockey along with the Stavanger Oilers.

In 2015-16, the team qualified for the Champions Hockey League and surprisingly won its group after winning three of four games against Sparta Prague and Geneve-Servette. After then beating Red Bull Salzburg in the Round of 32, Storhamar finally went down to TPS Turku in the Round of 16 after a tough battle. Two years later, the team returned to the summit of Norwegian hockey, finishing first in the regular season and then going all the way through the playoffs to capture its seventh national title.