Many of the participants of the second annual EHC Hockey Business Forum had already visited Frölunda’s campus the day before and the main event – the conference and the trade show - continued to prove the strength of an alliance in which people share information and learn from each other’s lessons.

The first half of the day focused on the financial side of things, with presentations by Frölunda’s Åsa Nathell and Storhamar’s Njål Berge as well as sport economist Dan Persson.

Both Nathell and Berge talked about the importance of knowing your audience. According to Nathell, Frölunda has about 27,000 customers – although she also acknowledged that hockey fans don’t like to be called customers – who buy, on average, only 2.2 tickets a season, and go to, on average, 1.5 games. A better conversion rate would make Frölunda a better business and attracting the “one-and-a-halfs” would help.

A simple answer would be to run an ad campaign using some of the star players as spokesmen.

“But that wouldn’t appeal to the ‘one-and-a-halfs’ because they don’t know the players. They don’t go to the games because they love hockey, they go to a game for the excitement, just like I wouldn’t buy a Louis Vuitton bag for its attributes for carrying things around in,” Nathell said.

“You have to know who you’re talking to and then make the message personal. Experiment with the messages to see what works, but please don’t guess. Don’t hope. Hope is not a strategy,” she said. 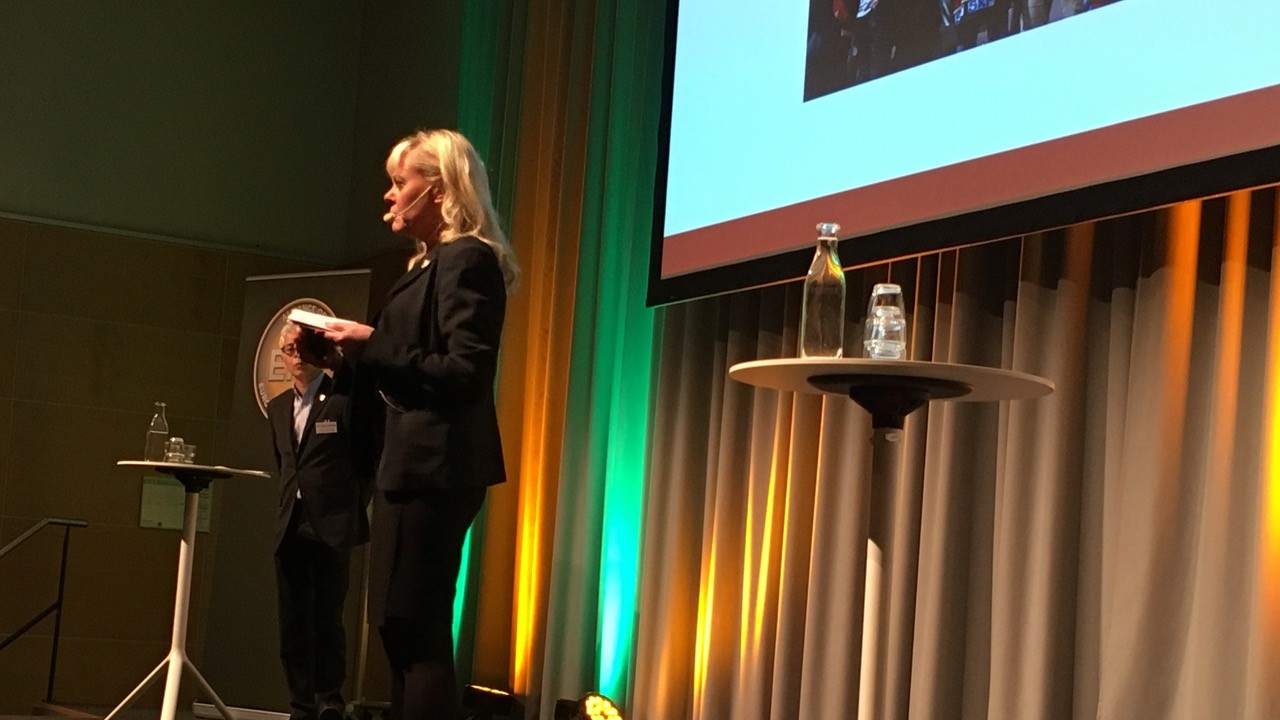 In Norway, Njål Berge helped Storhamar to increase their ticket sales by 318 percent in a few years, by focusing on not the ‘one-and-a-halfs,’ but the superfans.

The smartphone has become the hub of entertainment for Storhamar’s fans who get their news, their games, their interaction with the club, and their tickets on their phones.

“Ninety-five percent of our tickets are sold as digital tickers, on mobile. We didn’t even build a website for that,” he says.

Another notable thing: Storhamar cut the middle-man from their ticket sales.

“Never give away customer data,” said economist Persson, who told the club executives that globalization, urbanization, digitalization, individualization and artificial intelligence are going to change the world further.

“We do more things, but we spend less time on each one of them. On the other hand, there are now Premium customers, often middle-aged and middle-class, who have the money to spend on comfort,” he said.

“Tickets used to be bought, now they have to be sold,” he said.

Persson stressed the importance of knowing your customer and narrow-slicing the segments into smaller once so that people feel like they’re treated as individuals. 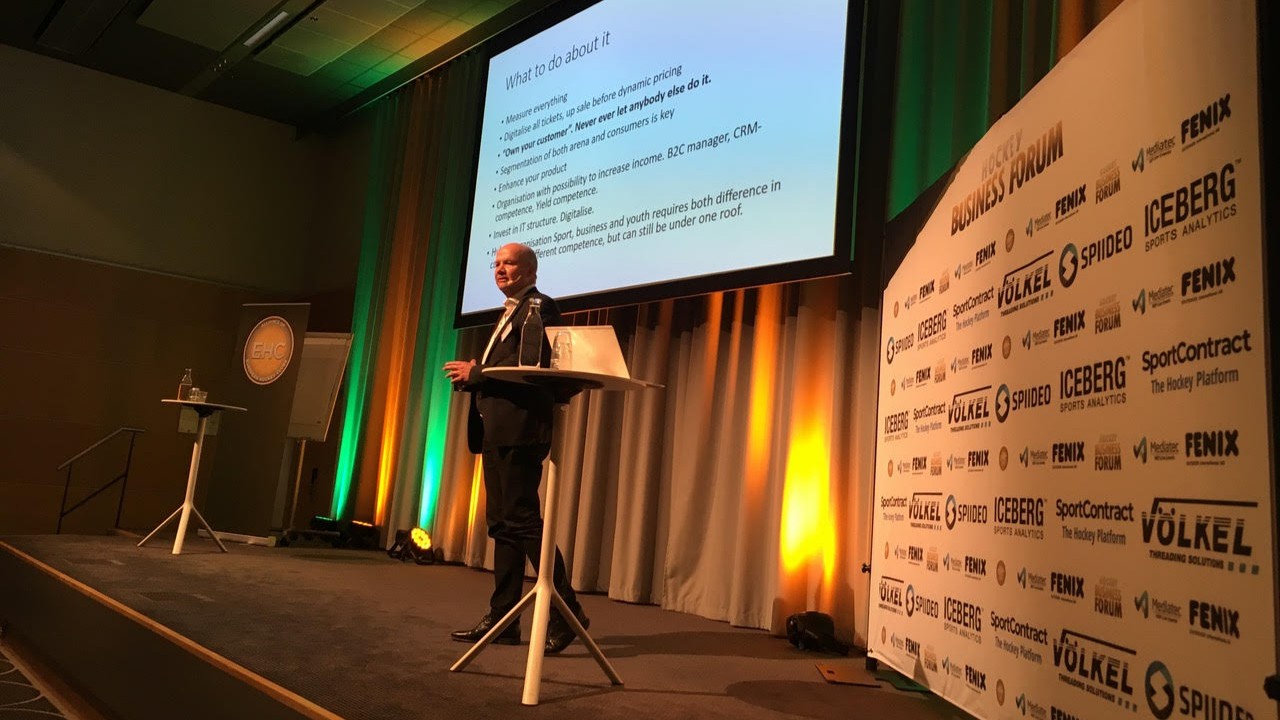 After the coffee break and networking with the trade show exhibitors, the conference changed gears and got closer to the ice again.

Alpo Suhonen, the first European NHL coach, opened his presentation with a video of opera singers, jazz musicians, and ballet dancers, mixed with clips from NHL and NBA games.

“Don’t think art and sports are different,” he said. “You can learn a lot from theatre, of how to produce a play, for example.”

“Try to open up your mind on performance culture because the players are acting on their own senses, own sensibilities, own bodies. Mick Jagger doesn’t sing Sinatra,” he said.

“We had a meeting with Cloetta, our biggest sponsor, who was acquired by a venture capital firm. They asked us how we could help them promote their chocolate in Poland and Germany, and we didn’t have an answer. That’s why we need a European tournament that works,” he said.

But hockey also has untapped potential elsewhere, he said. The Olympics are an event that hockey must be at, for example.

“Hockey is a small sport. We need the Olympics to grow,” said Helber who also would like to see an agreement that would keep young players in Europe longer and would compensate the European clubs better.

“I think the NHL should see it, not as a handout, but as an investment in European youth programs,” he said.

And since money is often tight, clubs have to be smart with it. One way, says Mike Zanier, former NHL goalie, is to not spend too much on a goalie.

“Spend your money on a 'good enough' goalie and allocate the big bucks on positions that give team puck possession,” he said. 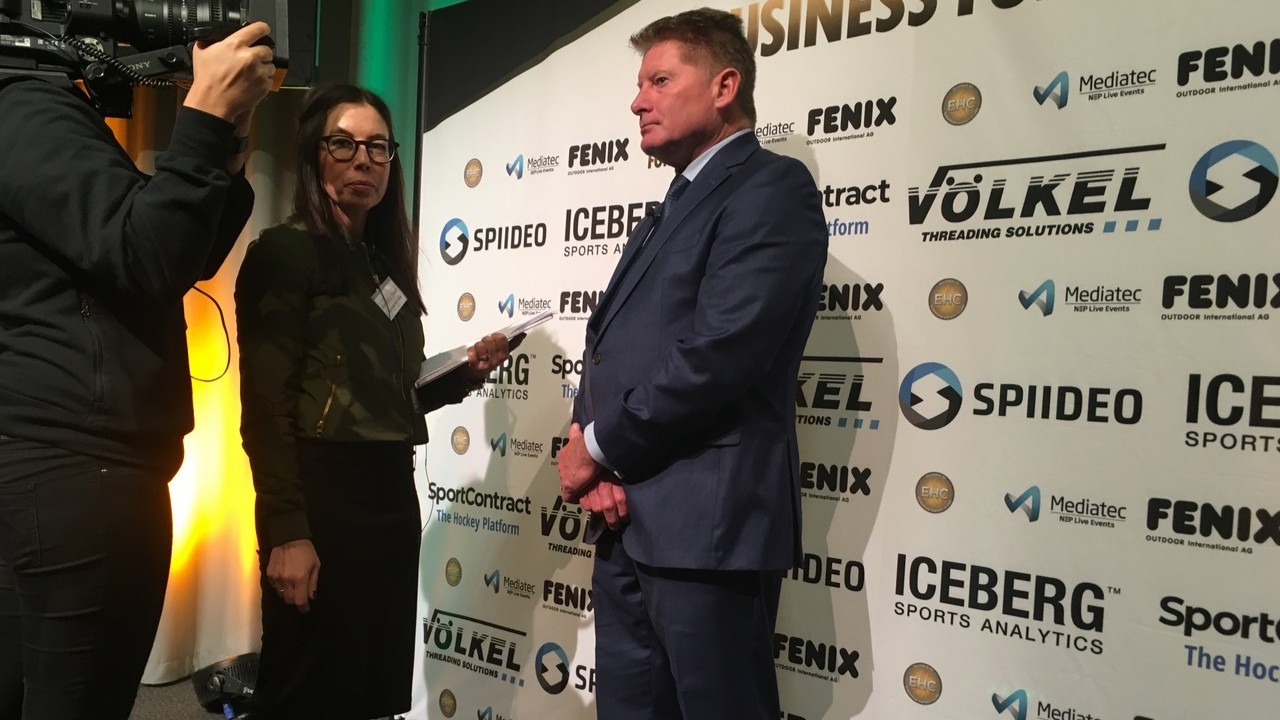 After another member of the NHL goalie union, NHLPA’s Glenn Healy, presented the business opportunities the NHL alumni can provide, the afternoon was capped off by moderator Sanny Lindström’s powerful speech on concussion. The topic is close to his heart since concussions ended his career in 2013.

“It’s your responsibility to make sure players get the help they need,” said Lindström as he read the riot act to European club hockey executives.