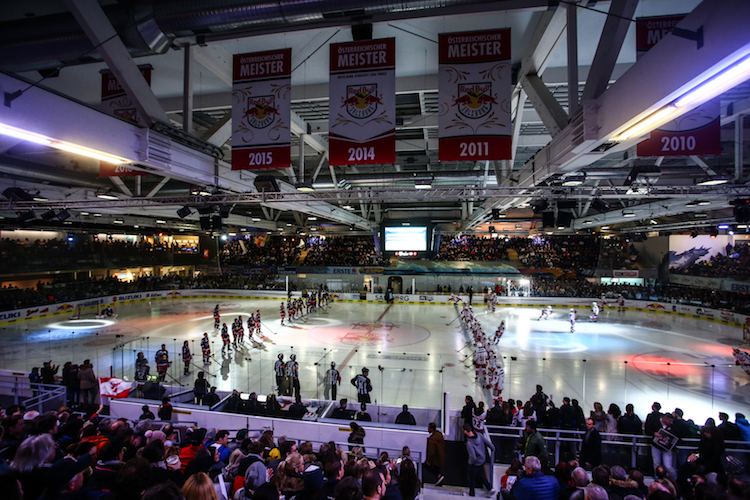 Salzburg's ice rink was built in 1960 and underwent renovations in 2001 and 2002, which transformed it into a multi-purpose arena. The ice rink, traditionally known as the "Volksgarten", has a total capacity of 3 400 and, besides being an ice rink, is also the ideal venue for other events, especially in the summer. The facility has two rinks of 60x30m, one of which was originally outdoors. A roof was added to the second rink in 2004, ensuring unlimited use even in the event of rain or snow.

The ice rink offers a wide variety of ice sports activities, such as activities for the public, ice hockey, figure skating, curling, short-track speed skating and formation skating. The arena can also be hired for events in summer (mid-April to the beginning of August) and is an ideal venue for concerts, musicals, exhibitions, etc.

Founded in 2000, EC Red Bull Salzburg has made a name for itself in recent years with success both nationally and internationally and is currently one of the top ice hockey clubs in Austria. Since 2014, Austrian as well as international talents additionally have the possibility to profit from the various training facilities at the Red Bull Ice Hockey Academy.

EC Red Bull Salzburg's roots go back to the 1987-88 season, when Red Bull backed what was then the Salzburg ice hockey club SEC, initially as a sponsor. After a strong season which saw the team finish fourth in the standings, the club was nevertheless relegated for financial reasons. The more recent history of the Salzburg ice hockey club began in 2000 with the return of Red Bull as title sponsor. The Red Bulls were crowned champions of the Oberliga (at the time, equivalent of the 2nd division) in the 2000-2001 season and reached the final of the Österreichische Nationalliga in the two years which followed. The Red Bulls finally secured the Nationalliga title in the 2003-2004 season, bringing an end to 16 years of absence from the Bundesliga (1st division).

With promotion to the Austrian 1st division (Erste Bank Eishockey Liga) came Red Bull's complete acquisition and restructuring of the club. After finishing seventh and last in their tough debut 1st division season in 2004-2005, Salzburg went on to reach the final in the 2005/06 season. In the season which followed, Salzburg's ice hockey team were crowned Austrian champions for the first time. Meanwhile, the Red Bulls are proud to look back at six won titles in the Erste Bank Eishockey Liga respectively seven Austrian Championship titles. Additionally, the Red Bulls won twice their own former invitationally tournament, Red Bulls Salute, against a strong international field and became the first Austrian team to win the IIHF Continental Cup.